You’ve always wanted to know how and why we ended up living in Mexico. Now that I am on my deathbed, I want to share this story with you, so you can document our family’s history and its many tortuous paths from one end of the world to another.

Well you were only a baby when there came a plague upon the world.  Our adoptive country, where we had made a life, having escaped wars and dictatorships from our native one, was now in the hands of a leader whose head was in the place of his ass and his ass sat proudly on his shoulders where his head should have been. Your Daddy was lucky enough to have gotten a job opportunity with a toilet paper cartel across the southern border in Tijuana. He and your mama left overnight with the help of a kind Coyote who took pity on the desperate people in this country and was taking many across the border into Mexico.

Your mother, who was an accomplished actress entertained the members of the toilet paper cartel every night when they gathered in the local dive, with her performance art, raising consciousness about Zoom racketeering, and other such calamities. So, the cartel owed your Daddy a favor, and they vowed to help him and his family. But you were small and fragile, and we decided it was too dangerous to take you along on that long journey. Your Daddy promised he would send for us after he and your mama got settled in Mexico.

At this time, the leader of this country woke up one morning and through the crack of his ass that was sitting on top of his head came this order that all the population had to be injected with Lysol. He mobilized all the army reserves, police and state troopers to catch whoever they saw walking in the street and give them a Lysol injection. Apparently he got that idea from his vice president who appeared to him in a dream in the shape of a snake and he said: “Mr. President, Your Highness, Supreme Leader, I think my people found a cure for the plague. The only thing is that the cure might be a bit worse than the problem.” “What is it Mike? Tell me, I trust you like no other.” “Well, Mr. President, Supreme Leader,” said the vice president channeling his voice and spirit through his favorite cobra snake: ”We have to inject the population with disinfectant, Lysol, bleach, whatever we can find. Apparently, the disinfectant goes directly to the lungs which are infected and kills the plague and cleanses the entire person from within, you know, sort of like the holly spirit would do it.” “It sounds brilliant, amazing! What’s the problem?” “Well, the problem is, Your Highness, that in the disinfection process the lungs are burned and destroyed and the patient dies. The survival rate is only 3%.” “That high?” said the president. “Well, it’s a rough estimate, we could lower it even more if we added some cyanide to the Lysol. This way only the 1% are left alive.” “I knew you were the only one I could trust Mike, you are a genius, you and Jesus Christ.”

So dear Granddaughter, men with syringes filled with disinfectant were lurking at every street corner. I knew then that I had to do everything in my power to escape and join your father and mother in Mexico. So, one dark night with no moon, I thought the time had come for the last resort: using the vampire traditions of my ancestors.

When I left my native country, three quarters of a century ago, I didn’t think for a second that I would ever make use of that backwards practice which had caused our people to be stereotyped around the world. But at the last minute I took in my purse the vial with the vampire spit that kills on contact. That night I wrapped you well in waterproof swaddles, hid you in my bag, took the vial with vampire spit and ran for my life. I walked for many days and nights, hiding in forests, canyons, deserted houses that had once been inhabited by people who had died of the disinfectant injections. And as I ran and ran for my life and yours, I left drops of vampire spit behind everywhere we passed. The Lysol police were falling like flies. It was us or them. We arrived at the border with Mexico on the fifth day.

A kind Coyote saw us and helped us cross over in exchange for the vampire spit. He hid us in his transport of face masks in the back of his truck. Your mother and father met us the next day and took us to their beautiful house on a nice street in the city, filled with bougainvillea and azaleas and blooming cacti and all kinds of other wonders. And it is this very house you have grown up in and have known as your home. And I will tell you one last little secret my girl: I had a second little vial of that precious vampire spit the night we crossed with the help of the Coyote. I kept one for us just in case you ever must deal with the Lysol police again. It’s in the tiny purple cupboard in the basement where I kept all my vampire memorabilia from the old world. Only you can open it, it’s one of those special devices you open with your eyes. Only use it as a last resort. I can die peacefully now that I shared our story with you. In your turn share it with your children and grandchildren, so they learn from the lessons of the past. 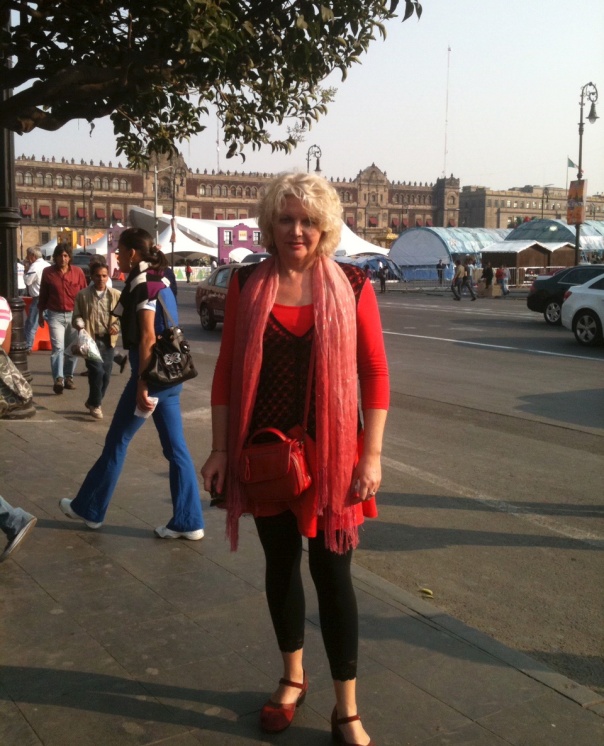