On the cusp of the publication of my third novel Country of Red Azaleas which is less than six months away, I am anxiously writing my fourth novel, My Father’s Orchards. Anxiously, because I find myself between birth and conception, letting go of one child of the mind and laboring to create another.  It’s a necessary agony that I can’t live without. I write because I can’t not write and because it makes me feel alive. I write because it roots me and re-roots me time and again in the colors, the smells, the feel of the world and writing gives me a country where I can belong.  When I was five months old at my own baptism, the story goes that I gave a sign I was going to be a writer. According to a Romanian custom/superstition, after the Orthodox baptism the family of the baby is supposed to present her/him with a tray filled with various objects representing the different professions: pencils, books, hammers, coloring pencils, water colors, a watch, a thimble, a tiny ball, on and on. According to the story in my family, when I was presented with this auspicious glittering tray I grabbed a pen which I wanted to eat, a mirror which I wanted to crash, a lipstick which I tried to eat as well. The verdict in my family was that I was gong to be a writer or an actress. I have been writing since the age of five and I dabbled in acting, though theater has been a constant presence in my life. So I suppose I am keeping true to my choices of when I was five months old.  Funny thing, it seems to me I have a memory of that day with the silvery tray filled with colorful objects, tellers of my destiny. I grab the pen, I grab the mirror, I grab the lipstick, I want to eat them all.  Yes, I suppose I write out of hunger for the world, I write because it nourishes me and it has chosen me. I don’t care how bad the world is, I write in the middle of tempests and wars and earthquakes, on a boat in the middle of the sea, on a mountain top, at a street corner, on a train, while swimming laps, while walking in the rain. I write out of love for the world and terror of the world.  I write to resist banality, uniformity, the monotony of mass produced thinking, injustice, violence, boredom, and because I chose it when I was five months old. A silver glittering tray with colorful objects, full of temptations, what will I be, what will I be? A writer, an actress, pick up the pen, put on the lipstick, be ready for the world!  If only it was that easy.   Marguerite Duras said in an interview “seule l’ecriture me sauvera,,” “only writing will save me” from the most atrocious solitude.  Yes, a pen, a mirror, and a lipstick.  An actress that keeps writing herself, a writer that keeps acting her roles. it’s a dizzying path, and sometimes the lipstick doesn’t match the mood or the story, but so what! Mismatches are fun. 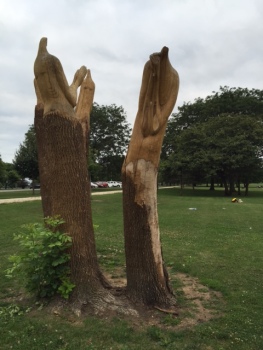 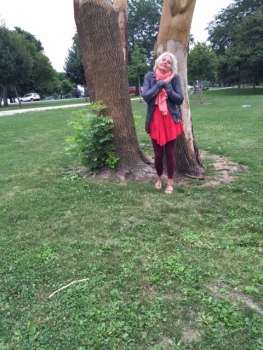 Theater of War and Exile
Twelve Playwrights, Directors and Performers from Eastern Europe and Israel

by Domnica Radulescu with a foreword by Maya E. Roth

Not Yet Published, Available Spring/Summer 2015 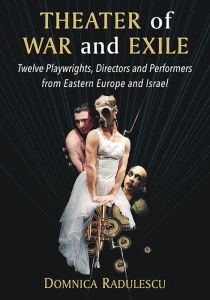 About the Book
In what ways does political trauma influence the art arising from it? Is there an aesthetic of war and exile in theatrical works that emerge from such experiences? Are there cultural markers defining such works from areas like Eastern Europe and Israel? This book considers these questions in an examination of plays, performances and theater artists that speak from a place of political violence and displacement.

The author’s critical inquiry covers a variety of theatrical experimentations, including Brechtian distancing, black humor, pastiche, surreal and hyper-real imagery, reversed chronologies and disrupted narratives. Drawing on postmodern theories and performance studies as well interviews and personal statements from the artists discussed, this study explores the transformative power of the theater arts and their function as catalysts for social change, healing and remembrance.

“Radulescu’s examination of the theater of the Balkans, Romania, Israel, and other sites of violence and exile demonstrates the power of theater to enable the survivors of trauma to document and witness, to reclaim the real, to produce social change, and to promote the possibility of healing, both on the personal and national levels…a model for understanding how artists depict and resist unspeakable violence and living a national identity far from that nation…will surely be of interest to scholars from a wide variety of fields.”–Kevin J. Wetmore, Department of Theatre Arts, Loyola Marymount University

“With an exile’s insight and an advocate’s clarity, with a scholar’s thoroughness and an artist’s passionate partiality, Radulescu assembles and frames an illuminating array of recent-and-contemporary theatrical manifestations that explore war-born, genocide-inscribed trauma.”–Erik Ehn, Professor and Chair of Theater Arts and Performance Studies at Brown University.